Australian Catholic nun Sister Patricia Fox attends a massat the Baclaran Church, Wednesday, May 2, 2018 in suburban Paranaque city south of Manila, Philippines. Fox had her missionary visa in the Philippines revoked after President Rodrigo Duterte complained about her joining opposition rallies. The Immigration Bureau has given her 30 days to leave the Philippines after the president ordered an investigation into the 71-year-old as an "undesirable" foreigner. (AP Photo/Bullit Marquez)

The Bureau of Immigration (BI) has denied the request of Australian missionary Sister Patricia Fox to extend her stay in the country.

In a two-page order signed Thursday, Fox’s request for extension, which was petitioned by the Superior of the Religieuse De Notre Dame De Sion, Inc., was denied by the BI citing the reasons behind previous deportation issued against her.

“The BI already saw that Sister Fox violated the conditions of her stay and is considered undesirable, hence a deportation order was previously issued against her,” said BI spokesperson Dana Krizia Sandoval.

She added that BI lawyers believed that approving the extension of her missionary visa will be inconsistent with the findings cited in the deportation order.

Likewise, BI lawyers noted that Fox had already spent 27 years in the country as a missionary, contrary to the Memorandum of Agreement between the BI and the Catholic Bishop’s Conference of the Philippines limiting the stay of foreign missionaries to only ten years.

Ms. Sandoval said the nun is required to apply for the downgrading of her visa within 15 days from receipt of the denial order.

Downgrading will revert her status to a temporary visitor’s visa, with a 59-day validity, starting from the date of the expiry of her missionary visa.

It can be recalled that Fox has a pending appeal to the Department of Justice (DoJ) on her deportation.

Sandoval said that the BI will have to wait for the DoJ’s decision before acting on the deportation, adding that the BI may grant Fox the temporary visitor’s visa upon downgrading, without prejudice to the resolution of her appeal to the DoJ. 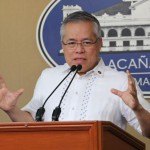