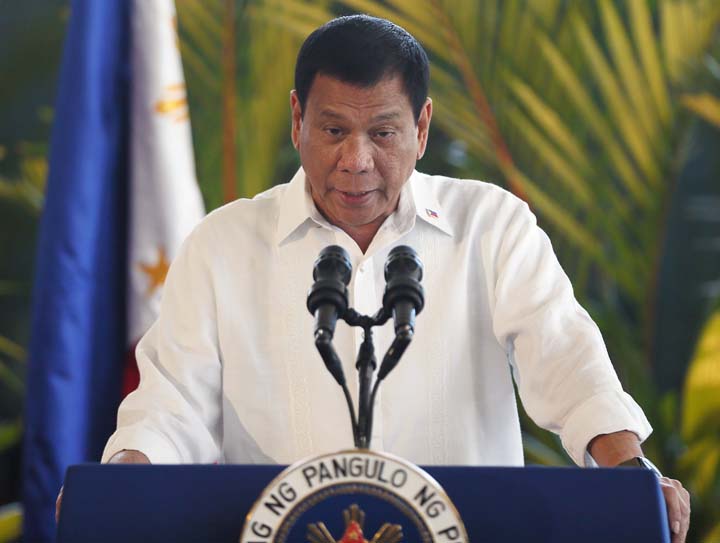 Philippine President Rodrigo Duterte addresses the crowd during a news conference prior to boarding his flight for a three-day official visit to Japan at the Ninoy Aquino International Airport in suburban Pasay city, south of Manila, Philippines, Tuesday, Oct. 25, 2016. Duterte lashed out anew at the United States following Monday's interview with U.S. Assistant Secretary of State for East Asian and Pacific Affairs Daniel Russel who said that Duterte's controversial remarks and a "real climate of uncertainty" about the government's intentions have sparked consternation in the U.S. and other governments and in the corporate world. (AP Photo/Bullit Marquez)

In line with his anti-corruption drive, President Duterte has fired all officials of the state-run Nayong Pilipino Foundation board and management for approving an irregular long-term lease contract of a government property.

Presidential spokesman Harry Roque said the President also wanted to cancel the 70-year lease contract, which he found as “grossly disadvantageous” to government.

The decision, reached by the President during a Cabinet meeting Monday, was announced by Roque on day of the launch of the controversial Nayong Pilipino project.

“The President started the meeting by expressing his exasperation that corruption continues even in his administration. He cited the case of Nayong Pilipino which leased government property for a ridiculous long period of time of 70 years beyond a lifetime of anyone,” Roque said during a Palace press briefing.

“He considered this as a contract which was grossly disadvantageous to government. He therefore announced that he was sacking all members of the board and management of Nayong Pilipino,” he added.

Asked if the lease contract will be cancelled, Roque said: “He (Duterte) said he will have it cancelled as being grossly disadvantageous to government.”

Roque however still could not say if charges will be filed against the Nayong Pilipino officials over the controversial lease contract.

Asked about the details of the contract, Roque said the President did not specify anything about the contract but merely ordered the dismissal of the officials out of exasperation with corruption.

“In fact, he did not even specify. Basta sabi niya everyone,” Roque said.

“It was a contract that originally was 70, reduced to 50, now reduced to 25 but the rental payment was still unconscionable,” he added.

Although he did not give details about the contract, Roque admitted that the President’s dismissal of the Nayong Pilipino officials came on the launch of the controversial project.

“In fact, ironically today is supposed to be the day they will launch it. Sorry to burst your bubble but the President said that’s grossly disadvantageous to government,” he said.

At the time of Roque’s press conference, Nayong Pilipino officials were attending the groundbreaking of a project forged with Chinese casino investor Landing Resorts Philippines Development Corp at the Entertainment City.