The Philippine National Police (PNP) yesterday warned illegal traders, particularly those targeting rice and other food products, to stop manipulating market forces or prepare for a battle that would be as intense as the war on drugs and criminality.

PNP chief Director General Oscar Albayalde said their initiative to support the war against unscrupulous traders was in adherence to President Duterte’s directive to stop rice hoarders and cartels as what was stated in his third State-of-the-Nation Address (SoNA) last week.

“Upon the guidance of President Duterte as embodied in the SoNA, we will aggressively support concerned government agencies in waging war against unscrupulous traders who willfully manipulate market forces for their own selfish gain that result in higher prices of basic and essential commodities particularly rice and food products,” Albayalde said in a press briefing at Camp Crame in Quezon City.

“Our firm responsiveness to the national anti-drugs and anti-crime policy will be of the same degree with our commitment to the national policy on food security and consumer protection,” he noted.

Albayalde maintained that the issue on rice hoarding goes beyond the economic issue of the fair trade. “This is a matter of food security that the state is duty-bound to protect and defend,” he emphasized.

In his SoNA last July 23, Duterte said: “I now ask all the rice hoarders, cartels and their protectors, you know that I know who you are. Stop messing with the people. I hate to… Power sometimes is not a good thing. But I hope I will not have to use it against you.”

“Consider yourselves warned. Mend your ways now or the full force of the State shall be brought to bear upon you. I am directing all intelligence agencies to unmask the perpetrators of this economic sabotage and our law enforcement agencies to bring them to justice,” he continued.

With this, the PNP chief said he has directed the Directorate for Operations (PNP-DO) to review existing operational plans, directives and issuances, including existing Memoranda of Agreement (MOA) with the Department of Agriculture (DA) and National Food Authority (NFA).

“[This is] to identify possible areas or rooms for improvement where we can strengthen law enforcement against rice smuggling, hoarding, pilferage, profiteering and illegal trade practices involving rice and basic commodities,” he said.

Aside from that, Albayalde said they will also coordinate with concerned agencies like the National Bureau of Investigation (NBI), Philippine Competition Commission (PCC), and others on how they could address the issue. 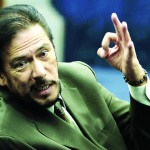