The Freedom of Information website maintained by the Presidential Communications Operations Office has drawn flak for its honest to goodness entries in its directory of government offices.

Twitter user @peepaubau posted screenshots of the directory numbers section of different agencies found in the FOI website Tuesday. But when looked at the Maritime Industry Authority and the Office for Transportation Security, he found an honest admission that the website did not know their fax numbers.

Instead of dashes like what were found on other entries, the two agencies bore the phrases “D koalam eh” and “D ko din alam” instead.

The Twitter user called out the government in his post and noted it has been consistent in its errors in social media. “Grabe talaga tong gobyernong ito, consistent everywhere. ‘Di ko alam’ entries are published sa government website,” @peepaubau tweeted.

He also posted a video of himself looking at the website to prove that his earlier screenshot was not edited.

The “di ko alam” entries were immediately fixed but not until after it drew flak from netizens who complained about the error.

The official Twitter account of the FoI program managed by the FoI-Project Management Office of the PCOO, replied to @peepaubau and said that they have already removed the error. (Argyll Cyrus B. Geducos) 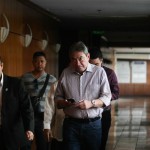