The children of squatter families living along a creek of the Estero de Magdalena in Tondo, Manila, were seen helping collect garbage from the waterway last week as heavy rains flooded many parts of Metro Manila. But that really was not a job for children; It was a job for city officials and workers.

For one, it was not safe work for them. Everytime it floods, health officials warn city folk against wading in flooded streets lest they get infected with leptospirosis caused by germs in dirty water. And here were half-naked children, standing in waist-deep water as garbage floated by.

But the real problem in Metro Manila is the garbage and sewage that flows the whole year, not just during this time of the year, through its many waterways down to the Pasig River and on to Manila Bay. It gets worse when it rains, as it did last week, but rainy season or not, the pollution flows unimpeded to the Pasig and to the bay.

Following a complaint filed by citizens, the Supreme Court in 2008 issued a decision directing 13 government agencies, led by the Department of Environment and Natural Resources (DENR) “to clean up, rehabilitate, and preserve Manila Bay.” The 13 agencies were each given their assignments by the court. Among them, the Department of Interior and Local Government (DILG) was directed to work with all local governments in the area around Manila Bay – from Bataan, Pampanga, Bulacan, to Metro Manila, to Cavite – with the goal of stopping the dumping of garbage and sewage and factory wastes into the streams and rivers flowing into the Pasig and other rivers, and into Manila Bay.

The National Government has just closed Boracay for being a cesspool, in the words of President Duterte. It will not, of course, close down Metro Manila and all the towns and cities polluting Manila Bay, but it should be able to mitigate the continuing pollution.

The rainy season has begun in the country and the streams and narrow streets of the squatter areas especially will be flooded more than most other parts of Metro Manila. If there is cleanup work to be done, we hope the various government agencies concerned will not have to use children to do it.

More important, it is time a comprehensive plan to clean up Manila Bay is drawn up. It has been ten years since the Supreme Court issued its decision and its order in 2008 and nothing seems to have been done about it. 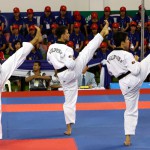