Hometown hero Shirmar Felongco made a late goal to help Kaya-Iloilo force defending champion Ceres-Negros to a 1-all draw over the weekend in the Philippines Football League at the Iloilo Sports Complex.

Felongco’s goal in the 86th minute came shortly after Mike Ott gave the visiting Busmen the lead on a tap-in, allowing the league’s top two clubs to split a point in the match held in front of almost 2,000 fans.

Ceres, however, maintained a six-point gap with its Western Visayas rival after producing 29 points in 12 matches.
Meanwhile, the Davao Aguilas claimed a 3-0 win over JPV-Marikina at the Biñan Football Stadium in a contest shortened by rain.

Brothers Phil and James Younghusband and Dennis Villanueva scored for the Aguilas, who improved to 17 points for third place.

In the other PFL match, Stallion-Laguna beat hapless Global-Cebu, 2-1, in Biñan, Laguna to stay in fourth place with 15 points. 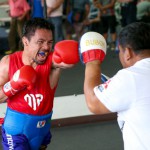