President Duterte has appointed two new officials at the Bureau of Customs and Department of Information and Communications Technology after firing State executives for corruption and excessive travels.

The Chief Executive also appointed a San Beda schoolmate, lawyer John Henry Naga, as undersecretary at the Department of Information and Communications Technology. Naga was chief of staff of the DICT secretary for nine months before assuming his new post.

The appointment papers of Chico and Naga were signed by Duterte on May 30. 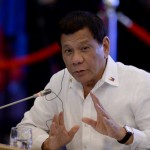