Acod said a motorcycle with three persons on board encroached on the lane and rammed into an Isuzu Elf truck driven by Johnny Ngale Togatog, 37, of Pico, La Trinidad, Benguet.

Acod said the accident happened in a descending, semi-blind curve portion of the road, which prevented the driver of the truck from avoiding the motorcycle.

The victims sustained serious injuries and were taken to the Baguio General Hospital and Medical Center.

Acod said as of 7 p.m. Thursday, they are still under observation and undergoing laboratory tests.

Togatog was taken to the Tuba police station for the filing of appropriate charges.

Investigation showed that Dabajo was descending fast on the slippery road and lost control of his truck and rammed the SSI truck which was parked on the road shoulder.

Dabajo sustained a minor injury on his left knee. 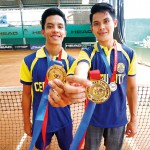