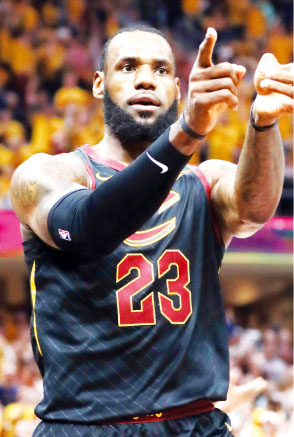 CLEVELAND (AP) – LeBron James knows the path to the NBA Finals better than anyone in today’s game.

And unless the Boston Celtics do something soon, he’ll get there again.

James bullied his way to 44 points, surpassed Kareem Abdul-Jabbar atop a postseason list and helped the Cleveland Cavaliers even the Eastern Conference finals at 2-2 on Monday night with a 111-102 victory over the Celtics, who are looking forward to getting home before their adoring fans.

Pushed by a raucous crowd that wasn’t so confident a few days ago, the Cavs held off Boston’s comeback in the fourth quarter and squared a tight series that is now a best-of-three.

Cleveland is trying to become the 20th team – out of 300 – to overcome a 2-0 deficit and James, who has already orchestrated two such rallies and is seeking his eighth straight finals, is a step closer to a third.

To do it again the Cavs will have to win in Boston, where the Celtics are 9-0 this postseason.

“We know it’s going to be a hostile environment,” James said. “We know their fans are going to be very energetic. But we have to just have our same mindset we had when we came home for these two games. If our minds are there, we put ourselves in a position to be victorious.”

Game 5 is Wednesday night at TD Center, and Celtics coach Brad Stevens is trying to stay positive with a team that has given up a 2-0 lead and fell to 1-6 on the road in these playoffs.

“It’s the best two out of three to go to the NBA Finals. Doesn’t get better than that,” he said. “Ultimately, anybody that didn’t think this was going to be tough, I mean, everything is tough. In this deal, it’s a blast to have to grit your teeth, get up off the mat and go after it again.”

“I’ve loved Kyle ever since we made the trade to get him here” James said. “I don’t remember Kyle falling too much like that. I’ve got to keep his body as fresh as possible. But listen, he’s doing whatever it takes to try to help us win, with the blocks, with the strips. Obviously his shot making is very key for our team as well, but it’s just the intangibles he’s doing for us defensively.”

Tristan Thompson had 13 points and 12 rebounds for the Cavs, who won despite 19 turnovers and two assists in the second half. Kevin Love had just nine points on 3-of-12 shooting and was in foul trouble, but he made a big 3-pointer and follow shot in the fourth quarter.

Jaylen Brown scored 25 and Boston had all five scorers in double figures, but the Celtics fell behind by 19 in the first half and didn’t have enough to catch Cleveland.

And, of course, they didn’t have James, who moved past Abdul-Jabbar (2,356) for the most field goals in playoff history. James also recorded his 25th career postseason game with at least 40 points — his sixth in this postseason.

The Celtics hung around in the second half and pulled within 100-93 on Marcus Smart’s basket with 4:29 left. But Thompson got free for a dunk, and after a miss by Boston, James recovered after making his seventh turnover by making a steal and layup.

Moments later, James drilled a 3-pointer from the left wing to finally put away the young Celtics, who will now feel the immense pressure of trying to hold off the three-time champion.

“He’s the best in the game at evaluating the court and figuring out what he wants and where he wants it,” Stevens said. “The thing about it is that you just have to battle. You just have to make it as hard as possible, because he’s going to find a matchup that he ultimately wants.” 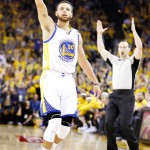