There were such great hopes for a peace agreement that would end the decades-old conflict between North Korea and the United States.

After joining the Winter Olympics last February, North Korea announced a series of moves that raised hopes and expectations everywhere. It said it would dismantle its nuclear test site and end the missile tests with which it had earlier threatened United States cities across the Pacific. Its leader Kim Jong-Un met with South Korea’s President Moon Jae-In at the Demilitarized Zone separating the two Koreas at Panmunjom. He asked to meet with US President Donald Trump who responded in kind. A summit meeting was scheduled for June 12in Singapore.

Then last Wednesday, North Korea threatened to scrap the summit, after cancelling scheduled talks with South Korean officials to discuss how to implement the leaders’ recent agreement to reduce military tensions along the border and generally improve overall ties.

What caused the change after so many positive developments?

We surmise that the immediate cause of North Korea’s sudden antagonism was the launching on Monday of the two-week Max Thunder drills, with American B-52 bombers and F-22 Stealth jet fighters capable of nuclear strikes. North Korea has long been denouncing the annual military exercises which, it said, are aimed at launching missile strikes against the North.

After their recent series of peace moves and offers, North Korean officials must have expected or hoped for positive responses from the US. If the North gave up its nuclear arms program, what might the US do in return? Would there be some kind of aid program for the North and its suffering people? Would there be economic moves, like the lifting of credit sanctions by Western nations when Iran suspended its own nuclear program in 2015? Would the US withdraw some or all of its 28,500 troops from the South Korea, which the North sees as a potential invasion force?

Any indication of what the US and South Korea could do in response to the North’s peace initiatives would probably have been welcomed.

Instead, North Korea’s first vice foreign minister Kim Kye Gwan said, President Trump’s top security adviser John Bolton and other US officials were issuing statements that the North should follow the “Libyan model” of nuclear disarmament, that there should be a “complete, verifiable, and irreversible dismantlement.”

Then came Max Thunder, with about a hundred aircraft participating in what the North called an “intended military provocation” and an ”apparent challenge” to last month’s meeting between the North’s Kim Jong-Un and the South’s Moon Jae-In.

There are still about three weeks before the scheduled June 12 Kim-Trump summit, plenty of time to mend whatever may have been disrupted by unexpected or unthinking comments, actions, or decisions by some officials. There is so much at stake in the coming summit talks – the ending of the threat of nuclear war. We continue to pin our hopes on the US and North Korea, that they will find a way to settle their differences and bring about the peace we all desire. 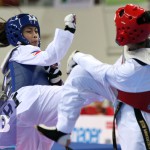