Reports disclosed by police that Eriguel, along with his escorts Bong Tubera and Bobby Ordinario, who were both killed along with the former lawmaker, were at the area visiting the campaign situation of candidates for Barangay and SK elections when they were shot by unidentified suspects onboard an SUV.

“The Philippine National Police reported to me this evening that former Congressman Franny Eriguel of the 2nd District of La Union was gunned down and killed in the Municipality of Agoo by still unidentified assailants. I have directed the Provincial Director of the PNP to immediately investigate this incident and arrest the persons responsible for this cowardly act.”

I am conveying my condolences to the family of my good friend Congressman Franny and am assuring His family that I will do everything to bring all those responsible to justice,” he added.

Police are still conducting an investigation as of this report. 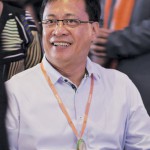