The Department of Justice (DoJ) is bowing down to the decision made by the Sandiganbayan in connection with the detention of alleged pork barrel mastermind Janet Lim Napoles.

Napoles was provisionally admitted into the WPP on Feb. 27. Because of this, she filed an urgent motion before different decisions of the anti-graft court in March seeking transfer from the Bureau of Jail Management and Penology (BJMP) to the DoJ-WPP.

However, the anti-graft court denied her motion for transfer for lack of merit.

Guevara filed one before the Third Division on April 13 and stated that Napoles was indeed previously granted a provisional coverage under the WPP. However, the DOJ “does not confer upon her an actionable right to demand detention or custody under the aforesaid program.”

Guevara also noted that Section 1 of Article IX of the Implementing Rules and Regulations of Republic Act 6981, otherwise known as the Witness Protection, Security and Benefit Act states that any witness who is under detention for any unlawful cause shall not be taken into custody by the department.

Instead, the custodian of the witness will be the one to ensure the safety and security of the witness. “It appears herein that accused Napoles is under detention pursuant to a process issued by this Honorable Court. This factual circumstance shall be taken into account by the Department in the final resolution of accused Napoles’ application for coverage under the subject program,” the manifestation further read.

Aguirre said the same thing in the manifestation signed on April 4 before the Fifth Division. “The Department hereby manifests and submit the foregoing for the Honorable Court’s consideration,” he said.

Napoles is facing several counts for violation of Section 2 of RA 7080, also known as the plunder law, as well as several graft charges before different divisions of the Sandiganbayan.

In the First Division, she is the co-accused of former Sen. Ramon “Bong” Revilla Jr. She is facing plunder and graft charges with former Senators Juan Ponce Enrile and Jinggoy Estrada before the Third and Fifth Divisions, respectively. 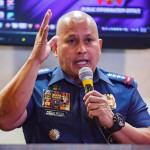