DAVAO City – Mexican Mauricio Mendez and Radka Kahlefeldt of the Czech Republic broke the Aussies’ domination of Philippine triathlon as they topped their respective sides in the pro division of the first Alveo Ironman 70.3 at the Azuela Cove here yesterday.

“That was a hard battle,” said Mendez, the reigning Xterra world champion. “I was in second place until the final 13 kms. The effort was just too hard.”

From fifth in the opening swim part, Mendez worked his way up in the bike stage then outlasted his veteran rivals in the grueling run event to nail his first Ironman 70.3 victory here in 3:50:32.

But while Mendez needed to unleash a strong finishing kick to snare the crown, Kahlefeldt dominated the women’s pro side and completed a wire-to-wire triumph in 4:25:38.

She came out on top in the swim leg then sustained her charge in the bike and run, posting a more than 11-minute victory for her sixth career championship.

Lisa Tyack, also from Australia, clocked 4:41:01 and placed fourth in her first pro race while Kirralee Seidel, also from Down Under, timed 4:53:04 for fifth in the event held in Mindanao for the first time in a decade of triathlon staging by Sunrise Events, Inc.

Mendez still trailed Reed in the early part of the run stage but grabbed the lead in the last seven kms and stayed ahead all the way to the finish.

“When I passed him, I never looked back,” said Mendez.

Reed rued dropping his bottle of power drink off his bike in one of the humps and opted not to stop to get it back in fear of losing precious time.

“I couldn’t afford to stop,” said Reed who also thanked countryman Berkel for sparing a couple of (power) gels. 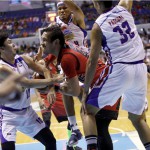