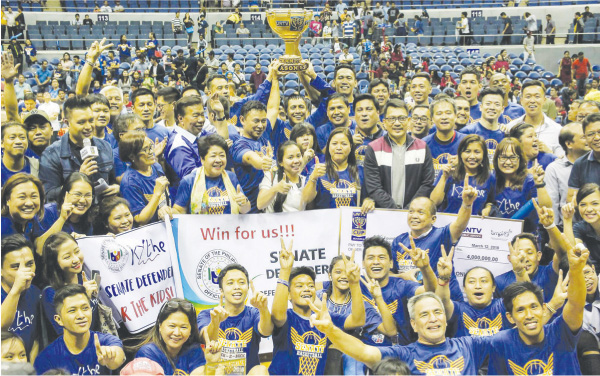 From last place to champion.

That’s what the Senate Defenders accomplished Monday when they swept the Malacañang-Philippine Sports Commission Kamao, 84-64, in the 6th UNTV Cup at the Smart Araneta Coliseum.

As expected the troika of Gary Sevilla, Jeff Sanders and Marlon Legaspi shattered Malacañang’s defense time and again with their inside plays on the way to winning their first-ever title in grand fashion.

After a slow start, the Defenders buckle down to serious work, regaining the initiative behind the torrid shooting of Sanders and Legaspi, who finished with 20 and 17 points, respectively, in the event organized by UNTV president and CEO Daniel Razon.

“We played as a team and I think that was the key,” said Angara, “Nakuha sa pagpupursige at sa pagtitiyaga.”

Fermin again credited the team’s defense, especially in the payoff period that saw them limit the Kamao to just 14 points while erupting for 25 points.

The Defenders won a cash prize of P4 million which will be distributed to their three chosen charities – Kythe Foundation Inc, Tanghalang Mapagpala Immaculada Concepcion Inc, and Bahay Pangarap Inc.

They won P500,000 for themselves while the Kamao settled for P300,000. Malacañang’s own charity will receive P2 million.