ABOARD USS CARL VINSON, Manila Bay – US forces are undeterred by China’s military buildup on man-made islands in the South China Sea and will continue patrolling the strategic, disputed waters wherever “international law allows us,” said a Navy officer aboard a mammoth US aircraft carrier brimming with F-18 fighter jets.

Lieutenant Commander Tim Hawkins said that the Navy has carried out routine patrols at sea and in the air in the region for 70 years to promote security and guarantee the unimpeded flow of trade that’s crucial for Asian and US economies.

When President Donald Trump came to power, Southeast Asian officials were uncertain how deep the US would get involved in the overlapping territorial claims involving China and its Southeast Asian neighbors.

China claims the South China Sea almost in its entirety and has challenged the US naval supremacy in the western Pacific.

The Trump administration has outlined a new security strategy that emphasized countering China’s rise and reinforcing the US presence in the Indo-Pacific region, where Beijing and Washington have accused each other of stoking a dangerous military buildup and fought for wider influence.

Washington stakes no claims in the disputes but has declared that their peaceful resolution and the maintenance of freedom of navigation are in its national interest. US officials have said American warships will continue sailing close to Chinese-occupied features without prior notice, placing Washington in a continuing collision course with China’s interests.

In January, China accused the US of trespassing when the US guided missile destroyer USS Hopper sailed near the Chinese-guarded Scarborough or Panatag Shoal, which Beijing wrestled from the Philippines in 2012, despite its proximity to the main northern island of Luzon. After voicing a strong protest, China said it would take “necessary measures” to protect its sovereignty.

The nuclear-powered Carl Vinson patrolled the sea prior to its Manila visit but did not conduct a freedom of navigation operation, Hawkins said. “That’s not to say that we won’t or we can’t, but we have not, up to this point,” he said. (AP and Francis T. Wakefield) 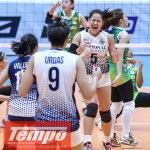