JUST A THOUGHT: As we express our gratitude, we must never forget that the highest appreciation is not to utter words, but to live by them. – John F. Kennedy

WHY MARIAN STAYED: Loyalty is not lost on actors like Marian Rivera, who renewed her exclusive contract with GMA Network, Inc. on Feb. 5.

The veteran actress, the network’s Primetime Queen, said she remains loyal to GMA because the company has been very good to her.

Marian added that she felt the support of her mother studio when she informed her bosses of her plan to get married to costar Dingdong Dantes. The same support was given her when she took a leave of absence when she became pregnant with their first baby.

GMA allowed her to take time off from acting. When she was ready to work again, the station assigned her small tasks so she could get back her bearing.

Marian says it feels really good to be cared for at GMA, reason why she has opted to stay.

She could have turned freelancer, considering that she has an independent manager operating outside of the network.

As she says, utang na loob wins in the end.

At the contract signing attended by GMA key officers and witnessed by media, Marian admitted there are no set programs yet for her. She expressed interest, however, in doing a drama series.

Also in attendance were her managers, APT Entertainment’s President Mike Tuviera and All Access To Artists President Rams David.

Marian has been a Kapuso for more than a decade.

PASSERBY (from my Facebook series): Travelling from one point to another in Metro Manila these days can be such a challenge. Driving is no longer an option due to heavy traffic and lack of parking space. Booking a ride thru Uber or Grab takes as long as half an hour if one is lucky. Finding a taxi is just as frustrating. Ending up with a taxi driver who is both rude and untidy is always a possibility. So what is one to do if he is Metro Manilan? Passerby imagines life in New Zealand where the air is clean and these problems are non existent. He sighs and prays for rain to stop and in their place Uber and Grab rates shall fall instead. Then again, he thinks life in another country can be so sad and boring. They don’t have these problems of ours that make life in these islands far more interesting. 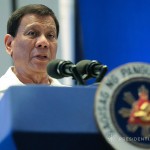 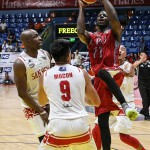