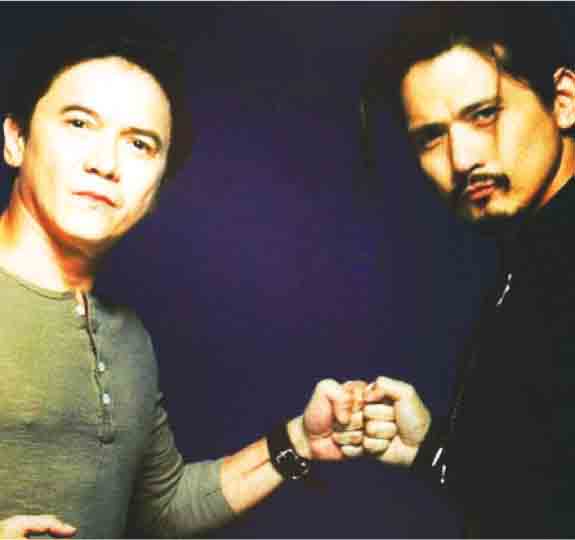 BROTHERS PADILLA – Omeng is Rommel and Binoe is Robin – the brothers Padilla. They are “billed” according to age.

They recently met the entertainment media in what may well be called “usapang lalaki” – as endorsers of Bravo, food supplement for men, “Ang bagsik mo!”.

Being what they are, Rommel and Robin are the perfect examples of the so-called macho men, desired by many a woman.

In other words they make women happy in the bedroom, as Bravo puts it, “Masarap ang buhay! Itodo ang arangkada na walang palya.”

Binoe’s married to Mariel Rodriguez and Omeng to a non-showbiz lady. Both are fathers many times over. In case you didn’t know, Rommel is the father of Daniel Padilla, whose mother is Karla Estrada.

Question: Are you willing to pose in the nude?

Well, may be so, but he remains, in the words of a noted lady columnist, “sinfully handsome.”

But he hastens to add, “Wag lang ipakikita ang lahat.”

So there, no frontal nudity please.

INSENSITIVE – As the presscon was nearing, somebody threw at Robin an insensitive question which offended the actor.

It had something to do with Aljur Abrenica, the live-in sweetheart of Robin’s daughter Kylie, mother of Alas.

Whoever asked the question should have considered the feelings of a father, who only wants the best for his daughter.

While Robin had talked to Kyle and carried in his arms Alas, he remains indifferent to Aljur. Of course, Robin wants them to marry. Then and only then could Robin perhaps accept Aljur as son-in-law.

No matter, Robin remained friendly to the press…smiled and thanked them for attending the Bravo event.