Almost P50 billion will be initially needed to rebuild Marawi City after being left in ruins by a five-month rebel siege last year, Malacañang said yesterday.

Presidential Communications Assistant Secretary Marie Banaag said Marawi will require an initial estimate of R49.81 billion for its rehabilitation after the city damage and losses reached around P18.2 billion.

The latest figures were obtained from post-conflict needs assessment conducted by the government.

“As of date, the total damage is over P11.61 billion while total loses is over P6.6 billion. The initial estimate of total needs is R49.81 billion. The final results are expected within the month, as committed by the Office of Civil Defense,” Banaag said.

“That would represent everything. If you wanted to rehabilitate housing and everything. All the things that are needed for Marawi to get back,” she said.

Del Rosario said the National Economic and Development Authority is expected to finalize a Comprehensive Rehabilitation and Reconstruction Plan for Marawi City by the second week of March.

“When it comes out, it will now factor in everything that would include the master development plan being envisioned by the city of Marawi and the province of Lanao del Sur,” Del Rosario said.

He said five real estate companies are expected to submit bid proposals for the development of 250 hectares in Marawi affected by the recent conflict.

Only one company will be chosen by the government to ensure a “synchronized” development of Marawi, including its water and waste drainage system, according to Del Rosario.

Once the project proponent is selected, he said a technical working group will craft the terms of reference and scope of work that will be published in the newspapers.

“We will be imposing a five percent reduction so that he can outbid the lowest, so in this way, we will get the best offer that the government can possibly get,” he added. 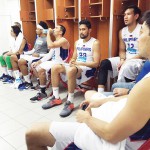