In an ideal world, all projects of the national government would be planned and prepared by the various departments, in accordance with long-range programs and the urgent needs of the moment. This is especially true of national infrastructure projects which are under the Department of Public Works and Highways. (DPWH).

But since Congress approves the national budget under its constitutional “power of the purse,” congressmen and senators believe they should not be left out entirely in the planning and funding of projects. Thus in the actual world, they are given some say in the budget proceedings, so that their own districts will get the projects that they need – a road, a bridge, a school building, etc.

It used to be officially provided through the Priority Development Assistance Fund (PDAF) that each congressmen may have R70 million worth of projects for his/her district, while each senator had R200 million. But the Supreme Court in 2013 declared this procedure unconstitutional; legislators can only approve the budget, they should not have any hand in the implementation of and payment for any project.

The leaders and members of Congress found a way around this. Members were asked to submit proposals for inclusion on the budget of the DPWH. Officially, the legislators would have no say in the implementation of the projects. It was enough that these be implemented to benefit their constituents.

Last week, this special arrangement came apart when several opposition solons discovered that the projects they had proposed were no longer in the 2018 General Appropriation Act approved by Congress. Speaker Pantaleon Alvarez said funds had to be realigned because of new programs such as free college tuition and police and military salary increases. He was frank enough to admit that the needed funds were taken mostly from the projects of 24 “undesirable” opposition lawmakers.

Sen. Panfilo Lacson has long insisted that the proposed national budget for 2018 still contained “pork barrel“ funds and asked President Duterte to veto them. He said he had been led to believe that the 2018 National Budget would be “pork-free” but noted that the DPWH budget had been increased by P11 billion.

The imbroglio arising from the disappearance of certain funds some opposition congressmen were interested in and Speaker Alvarez’s comment that “that’s life” seems to confirm that “pork barrel” indeed remains in the General Appropriation Act. But, as pointed out, members of Congress need to have some say in government spending.

We just have to ensure that there are no excessive allocations, that they are in line with the national government plans, and they are not used to unduly repress the minority opposition, so that it cannot properly perform its legitimate role as check and balance to the majority. 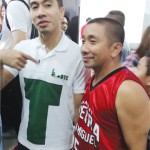