The hard part now begins for the Samahang Basketbol ng Pilipinas and counterparts from Indonesia and Japan after being awarded the right to host the 2023 FIBA World Cup over the weekend in Geneva.

SBP Chairman Emeritus Manny V. Pangilinan vowed to provide the best experience for everyone involved as the 2023 edition marks the first time the World Cup will be hosted by three countries.

“Hosting the FIBA Basketball World Cup in (the) Philippines, Japan and Indonesia is good because it does spread the basketball fever around in those countries instead of concentrating it in one place,” Pangilinan said, as quoted by FIBA.com.

“The work with Japan and Indonesia starts today. I’m sure at the end of the day it will be an excellent tournament for all three countries and for FIBA and for world basketball,” added the former SBP President.

SBP President Al Panlilio said prior to the group’s departure for Geneva that the Philippines will host four group stages while two groups each are going to be played in the Indonesian capital of Jakarta and in an arena to be built in the Japanese city of Okinawa.

“I think the cooperation with Japan and Indonesia has been unbelievable. They’re as much a part of this as we are in the Philippines. A lot of preparation and effort went into the bid. Now the real work begins,” said Gilas Pilipinas coach Chot Reyes, who was one of the aggressive campaigners on social media using a hashtag “#PlayLouderIn2023”.

Reyes was part of the group that traveled to Geneva along with Pangilinan and Panlilio. Other members of the delegation were Indonesia Olympic Committee President Erick Thohir, Japanese Basketball Association President Yuko Mitsuya, Ricky Vargas and SBP Executive Director Sonny Barrios.

Meanwhile, Malacañang hailed the SBP-led consortium’s successful bid to host the 2023 World Cup, saying that it will prompt the country’s reemergence in the international sports scene.

“We can expect this to spur tourism even further and provide added stimulus for businesses as well as investments,” said Presidential Communications Operations Office (PCOO) Secretary Martin Andanar in a statement released yesterday.

“We laud the initiative, hard work and commitment of the Samahang Basketbol ng Pilipinas and Mr. Manny V. Pangilinan in championing the country in securing the coveted games,” he added. “We are looking forward to #PlayLouderIn2023.”

Senator Sonny Angara, also the SBP Chairman, said while the World Cup would be a private enterprise, “government equity” remains a must.

“We have five years to prepare. Hopefully, by that time, train service in Metro Manila has improved, there will be less traffic, so we can encourage basketball fans from neighboring countries to come here,” Angara said.

“What government can do is to fix the roads, spruce up the city, and take charge of the security,” added Angara. (With reports from Argyll Cyrus B. Geducos and Hannah L. Torregoza) 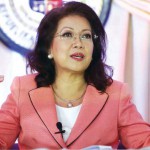