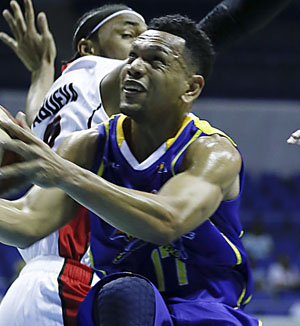 Gilas Pilipinas was glad to meet its goal of sweeping the first window of the 2019 FIBA World Cup qualifiers despite dealing with inconsistent play that hounded the squad in matches against Japan and Taiwan.

Struggles were evident Monday night for Gilas after having to dig out of an early 14-point deficit twice before knocking down the big shots when it mattered most to beat Taiwan, 90-83, before 11,444 fans at the Smart Araneta Coliseum.

It was a follow-up to a 77-71 victory over Japan three nights earlier in Tokyo that put Gilas in a share of top spot with Australia in Group B, almost halfway from claiming one of the three spots for the second round of the home-and-away qualifiers.

Though he expressed some concerns over the way Gilas performed in the first window, coach Chot Reyes offered a more-positive approach, given that his team had pulled off what needs to be done.

“Obviously we’re happy because we found a way to grind out two Ws despite being nowhere near 100 percent in our game,” said Reyes, whose team had problems shooting the ball, committing turnovers and even missing free-throw attempts.

Gilas turned the ball over 15 times each of the two games, the last allowed Taiwanese to go on a 10-2 lead after tipoff and held its last 14-point advantage at 19-5, before efficient plays backed by June Mar Fajardo’s best international game allowed the home team to come back.

It took a while before Gilas broke away as Matthew Wright drained three triples and Roger Pogoy had one in the fourth quarter even as Castro and Fajardo completed their all-around brilliance to seal the deal.

The win came despite naturalized player Andray Blatche going 2-of-9 from the field for six points and had six turnovers for the second straight game, though his 14 rebounds and a twin tower combination with Fajardo in the paint may have made up for his woes.

Blatche was limping as he left the Big Dome, probably feeling the effects of a hamstring injury that has hampered him since last year. Reyes said the Xinjiang Flying Tigers import later apologized for his poor play.

“I think we’ve seen the worst of Andray’s games,” said Reyes, adding that Blatche’s recurring fitness and scheduling issues left much to be desired. “But hopefully, in the next window, he’s gonna be in better basketball shape. He would have been playing a couple of months in China, so that should be able to help.”