With the Philippine Drug Enforcement Agency taking over the anti-illegal drug operations, President Duterte is planning to check if the agency has made a dent against the drug problem six months from now.

The President hinted the possible return of the Philippine National Police to the anti-drug efforts if the PDEA could not effectively deal with the drug problem.

The President has dared Western countries to take the “lead role” in solving the country’s drug problem as long as they do it in a “civilized way.” Duterte said he would be happy to order cops and soldiers to just relax and let these foreign critics address the drug threat.

In his remarks last Friday, Duterte claimed that foreigners critical of the drug war have merely accepted the reported number of extrajudicial killings without “being circumspect.” He said they have not even bothered to verify such information peddled by the left and the “yellow” forces.

“‘Yun lang ang binabasa nila that there were 10,000 extrajudicial killings. They don’t really bother to ask ‘yung the other side of it,” he said.

Without the police and military involvement in the anti-drug efforts, the President admitted he was uncertain if the drug situation would be resolved.

“Whether it will get worse or better, I simply do not have the answer,” Duterte said. “You have to cope up with the 2,000-strong PDEA…Kung hindi ko na kaya, sinong makakaya nito?” he asked.

Despite criticisms on his drug war, the President is determined to enforce the law without fear or favor in a bid to protect the nation from the drug threat.

“When I took my oath of office, I said, ‘I will protect the people and preserve this country, the Republic. And I will go against all criminals without fear or favor and enforce it equally,” he said. (Genalyn D. Kabiling) 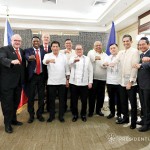