Allen Durham emerged from the dugout of the Smart Araneta Coliseum being helped by Meralco Bolts assistant coach Luigi Trillo and wearing a statement shirt that read, “Earned Not Given” after completing a victory that they certainly had to work for.

The Bolts’ 104-96 win over the underdog Blackwater Elite in Thursday’s knockout match cemented their place in the semifinals of the PBA Governors’ Cup, and Trillo was just one of many who gave Durham the needed support in this night of survival.

Baser Amer, Jared Dillinger, Garvo Lanete and Ranidel de Ocampo orchestrated Meralco’s comeback from 12 points down at halftime with their steady outside shooting and stingy defending, before Durham put the finishing touches on the hard-fought victory with crucial baskets despite spraining his right ankle minutes earlier.

The reigning Best Import deserved the help. After all, Durham had almost carried Meralco on his back with consistent double-double games that resulted in the league’s best record after the eliminations and a strong chance at rebounding from last year’s heartbreaking loss to Barangay Ginebra San Miguel in the finals of the same conference.

Durham and Meralco are moving on to face Star in a best-of-five semifinals. Elite counterpart Henry Walker, on the other hand, is heading home after coming close to completing a monumental upset that would have made them the PBA’s fourth No. 8 seed to upset the No. 1-ranked squad.

Thoughts of such dream scenario becoming a reality seemed likely when Walker came out firing for 27 points in the first half, including three straight triples that gave the Elite their first double-digit lead at 48-37 in the second period.

Bolts coach Norman Black later decided to replace Cliff Hodge with De Ocampo as Walker’s defender. The gambit paid off, and Walker could only make seven points the rest of the way, even as the Elite lead disappeared.

“They keyed in on me and turn me into more of a facilitator. I mean kudos to them,” Walker said after coming out of Blackwater locker room moments earlier than Durham while expressing some sort of gratification over his latest PBA stop.

Walker came in as a replacement for the injured Trevis Simpson, and a solution to Blackwater’s woes. The Elite started out at 0-3, their chances of making the quarterfinals appearing to be impossible. 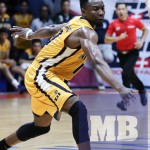