As of 1 p.m. Tuesday, Maring was in Tanay, Rizal, and has maintained its maximum sustained winds of 60 kilometers per hour (kph) and gustiness of up to 100 kph. It is moving west-northwest at 15 kph.

The concentration or peak of rainfall brought by Maring were due Tuesday over Bulacan, Cavite, Laguna, Batangas, Rizal, and Quezon as the cyclone moves across Luzon, Peñaranda said.

Rains will lessen significantly by Wednesday but moderate to heavy rains are still expected over the western section of Central and Northern Luzon as Maring moves towards the West Philippine Sea, Peñaranda said. (Ellalyn de Vera-Ruiz) 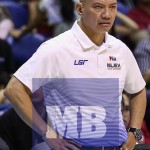