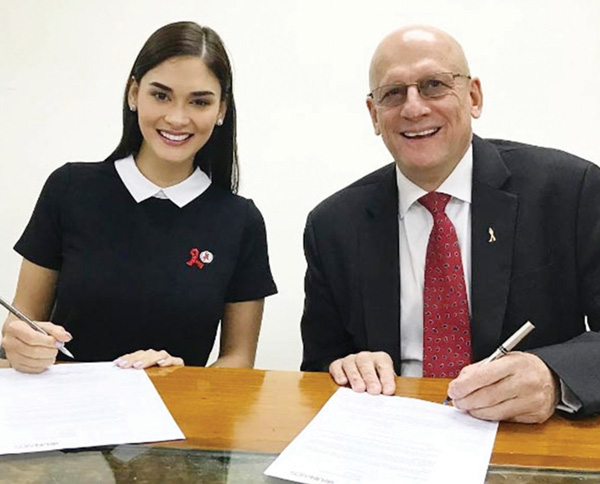 Miss Universe 2015 Pia Alonzo Wurtzbach has been appointed Goodwill Ambassador of UNAIDS for Asia and the Pacific as she continues to help promote awareness on the prevention of the dreaded disease.

“Finally it’s official! I will be working with UNAIDS as their Goodwill Ambassador for Asia and the Pacific. To help raise awareness on HIV/AIDS and see the end of AIDS by 2030. Join our campaign by using the hashtag #LIVE2LUV ♥️ and don’t forget to get yourself tested!” said Wurtzbach on Instagram.

Wurtzbach shared a photo on IG which showed her signing the official letter with Steve Kraus, Director of UNAIDS Regional Support Team, Asia and the Pacific.

The Filipino-German beauty queen has been at the forefront of the campaign against AIDS when she was crowned Miss Universe in Las Vegas, Nevada in December 2015.

The campaign against HIV AIDS has become one of the major advocacy of the Miss Universe Organization.

In June 2016, Wurtzbach renewed her appeal to the public to know their HIV status by testing.

Wurtzbach revealed that one in every eight people with HIV does not know his or her HIV status.

“Which means, some individuals are not receiving the attention and care that they need and deserve to stay healthy and avoid risking others,” she said.

Wurtzbach has been tested negative for HIV when she underwent testing in the US during the National HIV Testing Day in June 2016.

“Start talking and stop the spread of HIV. Take that first step. Take control. Get tested. Know your status. The risk is not knowing,” she added.

In February, local health officials said that they have recorded an 18 percent increase in the number of human immunodeficiency virus (HIV) which causes AIDS in 2016 as compared to 2015.

DoH said that the most common mode of HIV transmission of HIV is through sexual contact, especially male to male sex. Second is through sharing of infected needles among drug users.