Crowd favorite Rachel Peters, 25, bested 39 other candidates for the coveted title during a five-hour show which started evening of April 30 and ended up early morning of May 1.

Peters impressed the panel of judges when she answered the question of European Union Ambassador to the Philippines Franz Jessen: “This week, the Philippines hosted the ASEAN (Association of Southeast Asian Nations) Summit. If you were invited to speak, what would have been your message to the leaders?”

She said: “I believe that one of the biggest problems of our country is divisiveness: in politics, religion, and culture. I believe it is same across the world and that is something I would like to address. If we can learn to tolerate each other’s differences and respect each other, then we will be a stronger nation going forward.”

As an events organizer, Peters has worked with foreign artists Katy Perry and Christina Aguilera. She also loves dogs.

Peters was also trained and groomed under the Kagandahang Flores beauty camp under Rodgil Flores. She is in a relationship with Governor Miguel Luis “Migz” Villafuerte of Camarines Sur.

She finished her International Baccalaureate at the British School in Phuket, Thailand. She has a Bachelor of Business, Tourism and Events major from La Trobe University in Australia.

Peters also said that she officially became a Filipina on November 4, 2015 as she held her Philippine passport on Instagram. It was captioned: “Salamat po dfa. Officially a Filipina today!!! Yewww.”

The prestigious beauty pageant also introduced new formats in the show. From 40, the candidates were narrowed down to 25 as they competed in evening gown and swimsuit. Candidates with high scores in both competitions advanced to Top 15.

Borja, 26, graduated with First Class Honors from St. Mary’s University in London. She has worked as a fashion merchandiser for a top fashion boutique before pursuing her ultimate passion of joining beauty pageants.

Family members of Peters and Villafuerte were jubilant when the name of the Camarines Sur beauty queen was announced as the top winner of the night.

“I am very happy for Rachel. She represented all the Bicolanos here tonight. I know what she’s gone through the past three months for the Bb. Pilipinas regimen. Congratulations CamSur! Congratulations kay Rachel!” said Villafuerte.

“I am overwhelmed! I am overjoyed! I am so proud of Rachel,” said Nigel, father of Rachel, who also came with his wife. “I used to live here for 10 years but her brother (Daniel) stays with her in the Philippines.”

Nigel said that his family flew in from Thailand to cheer for her daughter.

Just like Rachel, Nigel is also a concert promoter. He said that he has promoted so many concerts in the Philippines.

“We have a company named Midas Promotions.”

Midas Promotions staged concerts of Bryan Adams, The Moffats, David Guetta, Simple Plan, Pentatonix, Charlie Puth, Selena Gomez, Engelbert Humperdinck, among others, in the Philippines and around the world.

“She’s beautiful! She has a great education. Her Q&A was very good,” said Nigel when asked to comment on her daughter’s performance in the pageant.

Flores admitted that it is still the battle of beauty camps when it comes to prestigious pageants like Binibining Pilipinas.

“Until the results were out, I was really very nervous. We will have a celebration at the camp. Win or lose it’s for the girls,” he said.

On Peters, Flores said: “No. 1 she is so determined. No. 2 she always seeks advice. I am so happy with the results.

We have second runner-up. We have Miss Globe, Miss Grand International and Miss Universe.” 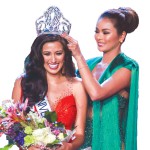