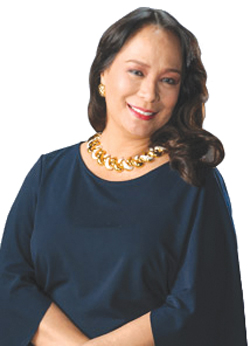 FAILED – Seems that beauty queens are not lucky in marriage. Many failed.

Without meaning to, the good name of Margie Moran (Miss Universe 1973) was dragged into the feud between Speaker Pantaleon Alvarez and Rep. Tonyboy Floirendo, both from Davao…and both have live-in partners.

Margie and Tonyboy have long been separated although it wasn’t common knowledge. Now news reports on air/ and in print have said so. Margie remains single, involved with Ballet Philippines and civic advocacy.

Hope that the romance between Pia Wurtzbach (Miss Universe 2015) and Marlon Stockinger leads to the altar. Marlon is rumored to be the father of twins. No big deal these days.

SAME SITUATION – In the same situation are our first three Misses International—separated (annulled?).

Melanie had an affair with Lito Lapid and was married to Derek Dee, then to an Arab businessman, with whom she had children. Her last (and perhaps final) husband is an American from Utah, where she is based.

But then another Miss Int’l, Precious Lara Quigaman, appears happily married to Marco Alcaraz. The two others—Bea Rose Santiago and Kyle Versoza are not married yet.

WITHOUT – How about those beauty queens without international titles? Some are also unlucky in love.

Well, not really. Pilar Pilapil and Miriam Quiambao were not lucky with their first husbands (Spanish and Italian, respectively), but then they found love the second time around. Definitely lovelier and sweeter.

Maribel Lopez is estranged (divorced?) from a Japanese, but then she’s enjoying life. They have a daughter, Mara Yokohama.