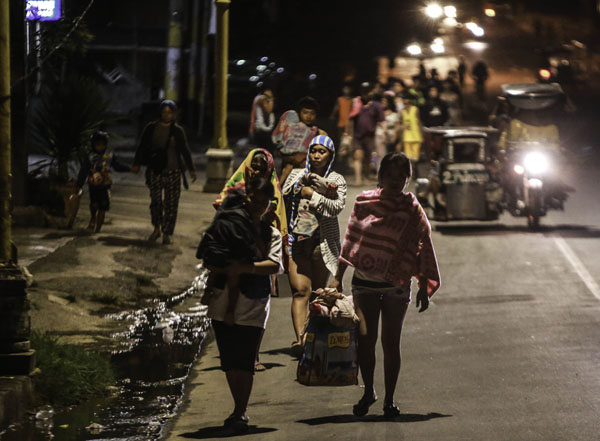 The strong 5.5-magnitude earthquake that hit Batangas Tuesday evening has sent dozens aftershocks in many parts of Southern Luzon, according to the Philippine Institute of Volcanology and Seismology (Phivolcs).

According to Phivolcs science research assistant Anna Shellah Enbien, 91 aftershocks have been recorded as of 11 p.m. Tuesday, a good number of which was felt as far as Metro Manila.

Enbien said forty-five of these were registered magnitudes from 2 to 4.9, but only five tremors, including the initial earthquake with a preliminary magnitude of 5.4, were felt or with recorded intensities.

“We can still expect aftershocks in the next few days because we are still at the threshold after the main shock.

Most likely the number and magnitude of the aftershocks will gradually decrease, while they last,” Enbien explained.

Phivolcs Deputy Director Dr. Bartolome Bautista meanwhile allayed fears regarding the possibility of the West Valley Fault acting up due to the recent Batangas tremor.

This was also backed by Science and Technology Undersecretary and Phivolcs officer-in-charge Dr. Renato Solidum.
“The earthquake in Batangas was generated by a fault that is not connected or related to the West Valley Fault, which transects eastern Metro Manila,” Solidum.

Termed as ‘The Big One’, the West Valley Fault is said to be ripe for a major activity which experts say could lead to a catastrophe as it runs through major cities in Metro Manila.

“We are looking at another fault that is in Batangas. We were initially looking at the origin of the earthquake near Lubang Fault but it is possible that it is from another fault going to the direction of Taal Volcano,” Bautista said
The 5.5-magnitude earthquake, which originated at six kilometers northeast of Tingloy, Batangas, was said to be shallow, thus shaking was widely felt.

It was felt at Intensity 5 in Malvar and Calatagan in Batangas while Intensity 4 was recorded in outside of the province particulary in Makati, Cavite, and Bulacan.

Only minor damages were reported, particularly the Taal Basilica and Tingloy church.

At the Batangas Medical Center, at least 50 persons are receiving stress debriefing from the Philippine Red Cross (PRC) after being traumatized by the earthquake.

The psychosocial support were being given to the affected persons who initially refused to return to the hospitals after treatment for fear of another tremor episode.

In Malacañang, Presidential spokesman Ernesto Abella appealed for vigilance and rely on announcements that come officially from authorities.

“Let us refrain from forwarding news from unverified sources that may cause undue alarm and panic,” Abella said.

Batangas provincial administrator Librado Dimaunahan has also clarified that there was no declaration of the ptovince being placed under a state of calamity.
(With reports from Genalyn D. Cabiling, and Lyka Manalo) (ELLALYN DE VERA-RUIZ)