Barangay Ginebra and San Miguel are looking to avoid playing a tale of two halves as they break their 1-1 tie tonight in Game 3 of their best-of-seven series for the PBA Philippine Cup title at the Smart Araneta Coliseum.

Ginebra drew level with San Miguel after a 124-118 overtime victory last Sunday at the Quezon Convention Center in Lucena City, but not after blowing a 26-point first half lead and nearly fell to a 0-2 hole had not for Joe Devance’s game-saving buzzer-beater in regulation.

Feeling that it had dodged a bullet, coach Tim Cone would to see his team react well to the adjustments he and his coaching staff will make in their 7 p.m. encounter at the Big Dome.

“That’s really our challenge, and it’s hard – coming out-of-town, it’s a hard schedule, it’s a hard road. But we’re gonna battle, and that’s what we do, battle.”

Battle did Ginebra show in Game 2 after squandering what appeared to be an insurmountable 65-39 lead in the second quarter. Devance’s basket that forced overtime highlighted his best performance since injuring his left foot with 16 points, seven rebounds and two blocks.

Scottie Thompson turned out to be the star of Game 2 with his 18-point, 18-rebound, eight-assist outing, a statline that is mindboggling considering the sophomore guard is only 6-foot-1.

Other players stepped up for Ginebra, with Kevin Ferrer scoring 18 of his 21 in the second quarter, even as LA Tenorio, Japeth Aguilar and Sol Mercado breached double figures after they and the rest of the starters combined for just 19 in the 109-82 loss in Game 1.

Cone gave heavy minutes to eight players last Sunday, and expressed confidence that it can play to Ginebra’s advantage since the likes of Dave Marcelo and Jervy Cruz played sparring minutes, while the tandem of Mark Caguioa and Jayjay Helterbrand played the role of cheerleaders the whole game.

“I expect two very tired teams to play, and both teams are going to have to reach deep into their benches,” he said.

“We didn’t get Jay and Mark today in the game, but that’s great because they’re gonna be fresh in game 3, and Jay and Mark are definitely playing in Game 3.

“So that’s one of the advantages of not playing them tonight, we’ll have them fresh,” he added.

The Beermen felt like they wasted a golden opportunity of doubling their lead in the series. They charged back behind their outside shooting led by Marcio Lassiter, who shot five threes in the third quarter before getting ejected late in the period for taunting at Mercado.

Ronald Tubid also delivered big contributions for the second straight game. His back-to-back triples tied it up for the last time at 118-all in overtime, before failing to prevent the late Ginebra charge.

“We’re down by 26 points, pero nakabalik kami. But we came up short. Probably next game, we won’t do it again. Hindi kami magpapauna.” 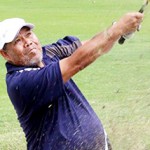