Barangay Ginebra San Miguel drew scattered production from almost everyone inserted by coach Tim Cone and made it two in a row over the foul-prone Star Hotshots, 93-86, to tie their best-of-seven semifinal series at 2-2 in the PBA Philippine Cup at the Smart Araneta Coliseum.

At the forefront of Ginebra’s highest-point production of the defensive-minded series was Jervy Cruz, who started at power forward and scored 21 points even as Sol Mercado, LA Tenorio, Chris Ellis and Scottie Thompson had their share of contributions in thickening the plot in the showdown dubbed as the “Manila Clasico.”

Aguilar had 18 points, including 12 in the fourth quarter that sealed Ginebra’s victory. Tenorio bucked a 4-of-13 shooting to dish out five assists, Thompson grabbed 14 rebounds, while Mercado scored nine.

“Only thing we did at this point was to tie the series, made it a best-of-three,” said Ginebra coach Tim Cone. “I thought our guys have great resolve. We came out on top, we seemed to have control most of the game but they hang around, hang around and never let us extend the lead.

“But we got a lot of help from guys, other than Japeth and LA and that was huge for us. Guys like Dave (Marcelo) and Jervy stepped up, Chris stepped up on the defensive side. We have some guys we don’t normally talk about did the work today.”

Ginebra also benefited from the 36 fouls committed by the Hotshots, much to the chagrin of coach Chito Victolero who at one point was given a technical for arguing at officials.

Meanwhile, officiating will be under intense scrutiny tonight as the San Miguel Beermen and TNT KaTropa seek a 3-2 lead in Game 5 of their best-of-seven semifinal series at the Smart Araneta Coliseum.

Both teams have had their say about how the referees have called the series, something that may heard anew following the 7 p.m. tussle that will put the winner on the threshold of advancing to the finals of the league’s season-opening conference.

Two days ago, TNT expressed its disappointment over the whistles blown in San Miguel’s 97-86 victory at the Mall of Asia Arena, with KaTropa coach Nash Racela saying that the Beermen have been getting some special treatment.

“Ako, I don’t buy that as a coach. If you demand something, demand the right calls be made by the referees. If you lose by getting the right calls, tanggapin natin. But demanding for some special treatment? That’s wrong.” 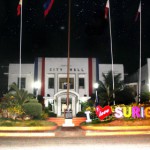