After leading Barangay Ginebra San Miguel to its first title in eight years during the season-ending Governors’ Cup, multi-titled coach Tim Cone declared his team is capable of building a dynasty in the Philippine Basketball Association (PBA).

With two grand slam titles under his belt, Cone knows whereof he speaks.

Tonight, the Kings begin their new season against TNT KaTropa in the main game of a regular doubleheader in the PBA Philippine Cup at the Smart Araneta Coliseum.

The Kings needed six games to beat the Bolts to win the import-laced Governors’ Cup.

This season, the league’s most popular ballclub is setting its sights on the all-Filipino crown which it last won in 2007.

The Kings did little to change their line-up, adding rookie Kevin Ferrer to their already formidable lineup.

Greg Slaughter is still on the injured list, but the Kings have shown they can win games without their seven-foot center.

Against the KaTropa, however, the Kings will be tested early.

Point guard Jayson Castro will return to action for TNT which is coming off a 101-87 loss to Rain or Shine.

Without Castro directing plays, the KaTropa shot a miserable 37-percent shooting from the floor against the Elasto Painters.

The Kings had an extended vacation following their victory, a fact not lost on Cone.

“Hopefully we get over our first game jitters early and get going right away. You can’t beat TNT without your ‘A’ game. I think we’re all looking forward to getting this thing started,” he said.

In the first game, Blackwater hopes to follow up its 94-87 win over Phoenix when it takes the floor against the Bolts.

In that game, top rookie Mac Belo had a rousing debut, scoring 17 points and pulling down nine rebounds.

The Elite, however, will be facing a team whose confidence level is high following its stint in the Governors’ Cup finals.

“We are all excited to start the PBA season,” said Meralco coach Norman Black. “It’s important that we get off to a good start especially since four teams will be eliminated at the end of the elimination round.”

“Judging by their first game performance, Blackwater will be a tough game. We will look to match their energy and put a lot of focus on our defense,” added Black. 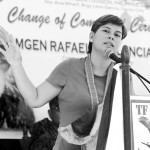