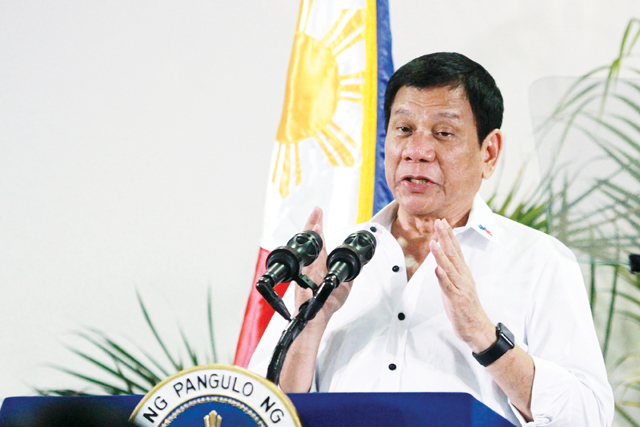 Unfazed by coup threats and reported plans of massive demonstrations, President Duterte on Friday called on military personnel and civilians opposing his foreign policy to come to Malacañang and he will swear them in to run the government.

Duterte, in his remarks before the Integrated Bar of the Philippines regional convention at the historic landmark Manila Hotel, said he is not worried about rallies and coup plots.

“Yung mga military who do not agree with me because they think I am closing my ties with America…No need for coup d’ etat. God, you are wasting your bullet,” Duterte said.

He said that if there is anyone who is prepared to run the government, he can step down immediately. “Go to Malacañang, we’ll have coffee and I myself will swear you to run this Republic and solve the problem. Walang problema,” he said.

The President noted that many soldiers had their schooling abroad, particularly in the United States. “Sa mga sundalo natin, most of them talagang nag-schooling ‘yan right after their days, along the career, pupunta ng Amerika ‘yan kasi nag-aral ‘yan doon,” he said.

“So if you think that you can help, sabihin mo sa akin because I will appoint you a group of presidential advisers with a Cabinet position or without a portfolio but with the rank of a Cabinet. And I will follow your instruction to a tee,” added Duterte.

Duterte said he is unfazed by the reported massive demonstrations next year. “For all I care. Wala akong illusions. Do not give me a reason to go out because you might have…you might get your wish.”

He said that the presidency is no easy task. “I cross the river at one o’clock in the afternoon and last night, (I) went back alas tres. Araw-araw ‘yan ah. Kung ganyan naman trabahong ibibigay mo sa akin, I can only endure that much,” Duterte said.

“Pagdating ko doon, lahat ng department may folder…That is the work for the day and I read it until morning time making marginal notes, disapproving and that is it,” he added. (Elena L. Aben)