A court in Leyte recently issued an arrest warrant against Espinosa in connection with the encounter near their house in Albuera town where firearms and explosive materials were seized.

Espinosa, son of beleaguered Albuera town mayor Rolando Espinosa, Sr. has reportedly fled to Malaysia the moment president Rody Duterte named police and local officials who are said to be involved in narco-politics.

Two days ago, mayor Espinosa was arrested in Albuera as an arrest warrant related to the raid in their residence was also served against the local official.

Dela Rosa said that the assistance of the Interpol would help alert police of other countries about Kerwin wherever he would go to hide.

“Now that the arrest warrant is already out, we can start with the coordination with the Royal Malaysian police through our police attaché,” said Dela Rosa.

Dela Rosa said the coordination stemmed from the information they got that Kerwin was still in Malaysia, which was further established with the records of the latter’s entry.

And since there was still no record of Kerwin’s exit from Malaysia, Dela Rosa said they are not discounting the possibility that the suspected drug lord which they have been looking for could still be in the area.

“We will ask them (Malaysian Police) to help us find him there,” said Dela Rosa. 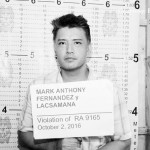